There’s nothing quite like seeing the artwork someone else has created to represent the words I’ve written! Wow! I am in awe!

Before I get to the big unveiling, I thought I’d share a wee bit about the design process. After HMH acquired Blind Spot, several people asked me what I wanted my cover to look like, and to be honest, I didn’t have an answer. I truly hadn’t envisioned one for it. Many authors I talked to thought that was strange — they had definite ideas for their books and some even expressed disappointment because a cover wasn’t anything like what they had pictured.

As my cover design process began, the only real input I gave besides the characters’ physical descriptions, what they would never wear, etc. was that if a design played on  Roswell’s vision, it had to be correct — that I was adamant about. Macular degeneration means her central vision is blocked and I didn’t want that incorrectly represented in any way.

When I saw the preliminary art, I was blown away. I’d never seen such a beutiful cover! I know all new mamas say that, but seriously. It was perfect! That awesome feeling soon faded to dismay, however,  when my editor told me they were unable to secure the artwork rights and would be returning to the drawing board.

In my case, I wasn’t disappointed for long. HMH reached an agreement with the artist, and after some slight changes, like adding a killer tagline . . .

I was in cover love 🙂 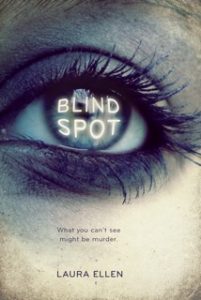 Are you? Leave a comment, tell me what you think. Two lucky commenters will win a $20 Barnes & Noble gift card and one lucky commenter will receive a signed hardcover of Blind Spot after it’s release October 23!

Please note: All comments must go through a moderator before posting to avoid spam. If your comment doesn’t show up immediately, don’t worry. it will!

58 Responses to “BLIND SPOT HAS A COVER!”